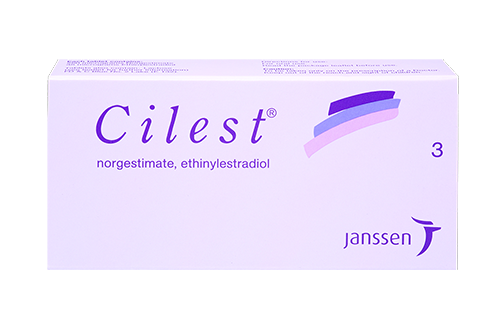 Please note – Cilest has been discontinued by the manufacturer. Please see our alternative contraceptive pills.

Cilest is a combined oral contraceptive. It contains the oestrogen Ethinylestradiol as well as the progesterone Norgestimate and has to be taken daily.

To place an order, fill in our brief questionnaire. You can choose a preferred treatment, such as Cilest. Our online doctor will review your information and approve an appropriate treatment.

A consultation for the contraceptive pill costs €20.

Who is Cilest for?

Cilest is a contraceptive pill for women and prevents pregnancy. Like other combined pills, Cilest is a very reliable and safe contraceptive, which has to be taken daily in order to work effectively. It is suitable for most women, with the exception of those who breastfeed, women who have had a stroke or thrombosis in the past and those suffering from illnesses affecting the kidneys or liver. Cilest is a prescription-only contraceptive and it is very important that you discuss prior health problems with a doctor before choosing an oral contraceptive.

How does it prevent pregnancy?

In principle, all combined oral contraceptives work in a similar way. Just like Cilest, they all prevent ovulation and lead to a thickening of the mucus around the entrance of the womb to prevent sperm from reaching an egg.

Does Cilest differ from other pills?

When should I start taking it?

If you have recently been prescribed Cilest for the first time, you should begin your first course by taking the first tablet from the blister pack on the first day of your period. This way, you will not require additional contraception. If you prefer to start taking Cilest on a later day in your cycle, you will need to use a barrier method such as a diaphragm or a condom for 7 days, until contraception with Cilest is effective. Don’t take Cilest if you suspect you might already be pregnant, as it will have no contraceptive effect in this case but may harm your baby.

Is Cilest suitable for smokers?

Smokers over the age of 35 are advised not to use contraceptives which contain oestrogen. This is due to the slight increase in the risk of thrombosis and blood clots, which is associated with the regular intake of oestrogen. If you drink a lot of alcohol, are suffering from hypertension, high cholesterol or any other health condition, you need to discuss your suitability for Cilest with a doctor and make sure you provide all relevant information.

What else do I need to know about contraception with Cilest?

While taking a contraceptive pill, you can enjoy spontaneous sex without having to worry about additional contraception. In this situation, it is easy to forget that with regards to sexually transmitted diseases, you are still having unprotected sex. It is vital that you continue to use a condom when having sex with partners whose health status you are unsure of. Having unprotected sex puts you at risk of contracting sexually transmitted infections such as gonorrhea, herpes, human papilloma virus and HIV.

I would like to get pregnant. When I stop taking Cilest, can I get pregnant straight away?

If you would like to get pregnant and have decided to stop using contraception, you should finish your current blister pack of Cilest. After having taken your last tablet, you will no longer be protected from pregnancy. You will be able to get pregnant from the time of your next ovulation. Usually, this occurs within 1 - 2 weeks of taking your last contraceptive pill. In some cases however, it can take longer. Taking a contraceptive pill generally has no long-term impact on your fertility.

How often do I need to take Cilest?

In order to work effectively and provide safe contraception, Cilest has to be taken at the same time every day. The only exception is the 7 day pill break in the fourth week of your cycle. You will find 21 tablets in one Cilest blister pack. After three weeks of taking a tablet every day you will have one week without taking any tablets, during which you will experience a period. You are still protected during this week but it is important that you start the next blister pack after 7 days.

What happens if I forget to take a pill?

If you have forgotten to take your pill but remember to take it within a 12 hour window, you are still protected. Just take your pill as soon as you remember and continue by taking the next pill at the usual time. This might mean taking two tablets on the same day. If you are more than 12 hours late, you may need to use an additional method of contraception for 7 days to ensure that you will not get pregnant. Whether this is necessary depends on your cycle - please read the patient leaflet of your pill, which will give you detailed instructions on how to proceed in different scenarios.

What does Cilest contain?

Some women experience side effects when taking Cilest.

Very Common Cilest side effects include:

Common side effects include:

You will find more information on rare side effects on the patient leaflet of your medication.

Cilest is may not be suitable for you if:

For a complete list of warnings please read your patient leaflet. It is important that you inform your doctor of any previous illnesses or current conditions affecting your health.

The following types of medicine can interact with the active ingredients of your pill:

If you need your medication urgently, choose DrEd's Pharmacy Collect service. This service is available between 9am and 4pm Monday - Friday. Orders placed outside of these hours will be processed the next working day. First, our doctors will review your treatment and approve if appropriate. We will then send an advanced notification of your prescription to a pharmacy of your choice. We aim to do this within an hour.

If your chosen pharmacy is unable to fulfil your prescription, we will get in touch with you to arrange alternative collection arrangements.

You can choose for your paper prescription to be delivered to your address. This takes 3-5 working days.